On Sunday 1 September 2019, the Darent Valley Community Rail Partnership launched with a train full of entertainment and special guests.

The Partnership aims to promote the scenic line from Swanley to Sevenoaks and the many local attractions along the route.

Sights include The Hop Shop and Mount Vineyard in Shoreham, Otford Palace, Lullingstone Roman Villa, The Stag Theatre, many country pubs and more.

By encouraging both visitors and residents to take the train, it will help ease the congestion on local roads and is more environmentally friendly.

The launch event started at Swanley rail station where guests, including local Mayors and several District and Town Parish Councillors, were taken by train along the Darent Valley line stopping at Eynsford, Shoreham and Otford.

There was entertainment on board, including a magician and live music.

The guests left the train at Bat and Ball for refreshments.

The grand finale was a vintage bus taking the guests to the final stop, Sevenoaks rail station.

Sevenoaks District Council Cabinet Member for People and Places, and Mayor of Swanley, Cllr Lesley Dyball who was at the event, says: “Making the Swanley to Sevenoaks line a Community Rail Partnership is the start of an exciting journey.

I hope it will act as a platform to promote the local economy, ensure residents get the most from their local railway line while reducing congestion on the roads going into the towns and village.”

Cllr Lesley Dyball adds: “We hope the communities will get behind the Partnership and use this scenic train route more often to visit the wonderful landmarks our District has to offer.”

Govia Thameslink Railway’s Partnerships and Corporate Social Responsibility Manager Katherine Cox adds: “We’re proud to be supporting the new Darent Valley Community Rail Partnership and hope local communities make the most of the opportunities to get more involved with their scenic railway line.” 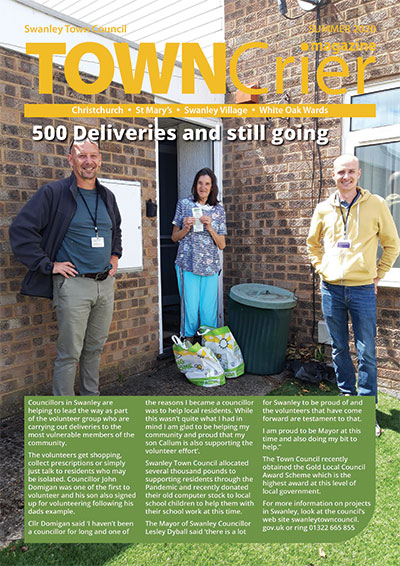